The Temple of God's Wounds 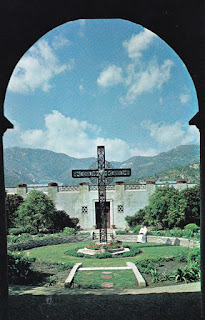 The cross at Mt. Calvary Guesthouse.

Every Holy Week for many years I have travelled to The Temple of God’s Wounds, a small book written in 1951 by the Anglican Bishop of Bombay, ‘Will Quinlan’ nee William Quinlan Lash, a mystic. Originally from England, in India the bishop helped found the Christa Prema Seva Sangha (sangha means “community”), which, according to his stub bio in Wikipedia, “sought to live Christianity in a way that was faithful to Indian culture.”

That explains how I received the book during Eastertide of 1988 from the Rev. John Cole, who served in India as a “fraternal worker” (missionary) his entire professional life, immersing himself in its culture and spirituality. John was a sweet and gentle and unassuming man who adopted the speech patterns and body language of the Indian people, complete with their signature deferential slight wobbling of the head.

John arrived in India the year before Gandhi was assassinated, but never met him because, he confessed to me, his Western reserve initially resisted the cult of personality often associated with Hindu teachers. But eventually India’s spirituality had as much or more effect on John than he on it. He spent his furloughs in the States with the church I served, and so became a friend and confidant and spiritual guide, especially after he retired to southern California.

You can tell that the story of how I came to have The Temple of God’s Wounds is as important to me as the story within the book. It took me a few years before I started using it regularly as part of my spiritual practice for Holy Week. In first person, the book tells the story of a discouraged, worldly but faithful man who is referred by a colleague to a contemplative community “in the West” that neither advertises nor hides its presence, but is accessible to its neighbors for help and prayers. He soon realizes that men and women of accomplishment in the world come there for solace, self-inventory, centering, and strength.

The central task he is assigned is the contemplation of seven paintings—one on each day—in the central circular sanctuary. Three have to do with the crucifixion, three with what follows, and the seventh with a vision of their meaning. Each bear witness to God’s wounded love.

It took me a few years of reading this little book to refrain from trying in vain to picture the author’s detailed descriptions of the buildings, which I can’t follow. Instead of exteriors, I am more interested in the interior life. His life in that week is enriched by walking the surrounding hills, tending the courtyard garden, visiting the sick and dying in nearby villages, sharing silence and worship, conversing with spiritual guides in the community, and reading helpful spiritual writers.

I also learned to set aside any discomfort I had with any Christian concepts that I may not embrace and accept the central truths about the spiritual life being revealed in this story. In other words, just like reading the Bible, I am looking for the “inside” story in the storytelling—what is intended to be conveyed in the particulars.

Each time I visit The Temple of God’s Wounds, with its central courtyard cross pierced with nails for each of Jesus’ five wounds, I think of the retreat house in the hills above Santa Barbara that I visited from time to time when I lived in southern California. Mt. Calvary was run by the Episcopal Order of the Holy Cross. It too had such a cross at the heart of its central courtyard.

My last two opportunities to visit there before it was destroyed in the Montecito fire of 2008 proved spiritual metaphors. The first, I wanted to show my partner and my family members who live nearby the spectacular view Mt. Calvary afforded of Santa Barbara and its shoreline. But my family members wanted us to see a still more spectacular view, and took us to a ridge high above Mt. Calvary, which, given the haze and the height, precluded good vision. The second, on the way home to Atlanta after my interim ministry in San Francisco, was my last opportunity to show Mt. Calvary to my partner and our dog, and we enjoyed a breathtaking view.

This contrast reminded me that the higher up you are does not guarantee an inspiring view. The Vatican, an ivory tower, a corporate ladder do not assure anyone a better perspective. Success, wealth, even fitness do not ensure vision. The successful but searching narrator of the bishop’s book gives further evidence of this.

That’s why we need centers and stories like The Temple of God’s Wounds.

I posted this on April 11, 2012, without the photo above, which depicts the cross at Mt. Calvary mentioned in the post.

Copyright © 2012 by Chris R. Glaser. All rights reserved. Permission granted for non-profit use with attribution of author and blogsite.