In memory of my soul friend Terry Flynn, who kept the Christmas spirit the whole year ‘round. May he rest in peace and rise in laughter.

In Charles Dickens’ A Christmas Carol, after the Ghosts of Christmas Past, Present, and Future have each paid Ebenezer Scrooge a visit, Scrooge vows to the latter spirit, “I will honour Christmas in my heart, and try to keep it all the year. I will live in the Past, the Present, and the Future. The Spirits of all Three shall strive within me. I will not shut out the lessons that they teach.”

And when the phantom leaves him and Christmas morn arrives, a redeemed Ebenezer Scrooge vows again, “I will live in the Past, the Present, and Future! The Spirits of all Three shall strive within me.” This is something to consider as we enter a new year.

One could say that the spiritual vitality of faith and its many stories and expressions derive from honoring the past, the present, and the future, letting them all strive within us. The nomadic Hebrews’ understanding of their spiritual ancestors going before them, as in a caravan, helps us look to our spiritual forebears who still lead our way. Buddhists realized the eternal in the now, illuminating our present. Christians keep us mindful of the inbreaking commonwealth of God manifest in serving “the least of these.” The Iroquois concept of the Seventh Generation reminds us to be faithful to our posterity in our stewardship of the earth—environment, resources, and creatures. And Latin America’s liberation theology speaks of the “memory of the future” which keeps God’s faithfulness in past generations (or in our own past) before us as we contemplate future possibilities.

Charles Dickens was a writer concerned for economic justice. He knew that in most of our hearts there is a little bit of Ebenezer Scrooge. “Bah, humbug,” we sometimes say, under our breath, when we hear a “naïve” or “impractical” or “idealistic” message. As Dickens completes the tale of a transformed Scrooge, he writes: “Some people laughed to see the alteration in him, but he let them laugh, and little heeded them; for he was wise enough to know that nothing ever happened on this globe, for good, at which some people did not have their fill of laughter in the outset…” Even so, Dickens tells us, Tiny Tim did not die, concluding the story, “And so, as Tiny Tim observed, God bless Us, Every One!”

Posted by Chris Glaser at 5:00 AM 0 comments

Put Yourself in the Nativity Story 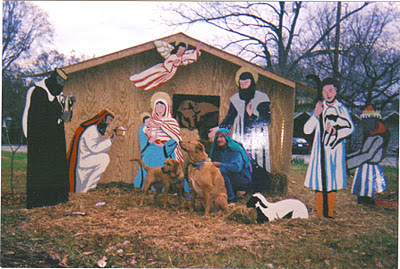 In his autobiography, Confessions of a Parish Priest, novelist and sociologist Andrew Greeley writes that most Roman Catholics in the U.S. are not “propositional” Catholics who assent to a number of “propositions” or doctrines. For example, a majority of American Catholics do not agree with the Vatican’s teaching on sexual ethics, dismissing its teaching on contraception altogether and questioning its positions on other reproductive choices, premarital sex, and homosexuality.


Greeley concludes from his research that they are not drawn to their church by dogma, but by the story—the biblical narrative, particularly the narrative about Jesus. I think that’s true of Protestants as well. We wonder why many Christians only come to church around this time of Advent and Christmas, but I believe it’s because we love the story of the baby Jesus born to Mary and Joseph, cradled in a manger, endangered by Herod, visited by shepherds and kings.


In the words of Kathleen Norris, “Human beings, it seems to me, require myth as one of the basic necessities of life. Once we have our air and water and a bit of food, we turn to metaphor and myth-making.” To me, myth is not a story that is untrue, but a story that carries a deeper truth that draws us in. As a 5-year-old once said, a myth is a story that is true on the inside. (Gertrud Mueller Nelson tells this in Here All Dwell Free.) Within the words is a Word.


In Care of the Soul, Thomas Moore suggests that imagination is one of the most underutilized and undervalued spiritual gifts. So I invite you to put yourself in the story of Jesus’ nativity. Jesus is not simply born to Mary. He is born to us, if only we use our imagination!


Are you King Herod, fearful of losing power or privilege as God is doing a “new thing”? Or an Eastern sage enduring academic malaise, seeking a star of inspiration? A shepherd routinely going about your business when the skies seem to open up? A prophet crying in the wilderness?


Are you a religious leader holding on to tradition at all costs? An empire’s bureaucrat missing the unfolding human drama? Or one whose life is too full to welcome a homeless, unwed mother-to-be? Joseph, serving quietly on the periphery of sacred drama? Mary, with an unsought calling to do the dirty and painful and lonely work of birthing a new movement? Or a vulnerable child born into a vicious and violent world?


Truth is, over a lifetime, we may play all of these roles in this story. Good to remember, at this time of year, that we hinder or help, blink or behold this nativity of God’s Word to us.

During a Q&A following my presentation on “Reconciliation” this past weekend in Pittsburgh, Pennsylvania, a young woman commented on the difficulty having true dialogue with an opponent who feels free to attack in a way that same opponent would resent being attacked.

I recognized the experience. Many religious and political conservatives seem to require a lot of coddling when we try to offer liberal or progressive alternate views. I try to say nice things about their heroes or values or viewpoints while they seem to feel no compunction blasting mine!

I had just contributed reflections to a lectionary resource book on Jesus’ admonition to his disciples as he sent them out to proclaim the commonwealth of God: “See, I am sending you out like sheep into the midst of wolves; so be wise as serpents and innocent as doves.” The King James Version has “harmless as doves,” suggesting gentleness.

But this counsel seems only to be expected of the underdog facing off with the powerful and privileged. And so in recent centuries we honor the wisdom and gentleness of people like Sojourner Truth, Margaret Sanger, Mahatma Gandhi, Martin Luther King Jr., Mother Teresa, Oscar Romero, and Desmond Tutu.

But why aren’t those who oppose movements of the Spirit similarly counseled to wisdom and gentleness? Why are they allowed to get away with ignorance and harshness?

Wise and gentle Mary’s anticipation of the commonwealth of God was read in the Pittsburgh churches I preached in Sunday: “God has shown divine strength, scattering the proud in the imagination of their hearts, bringing down the powerful from their thrones, and lifting the lowly; filling the hungry with good things, and confounding the privileged.”

In her book, Amazing Grace, Kathleen Norris reminds us that Mary’s song was considered so subversive that “the government of Guatemala banned its public recitation” in the 1980’s!

On the Threshold of the Church

Copyright © 2011 by Chris R. Glaser. All rights reserved.
Perhaps the best known quote from Simone Weil is “Waiting patiently in expectation is the foundation of the spiritual life.” But few know that she purposely chose to wait on the threshold of the church rather than enter to the exclusion of anything God loves.
To “wait for the Lord” is the advice of the Psalmist. To be patient is to endure, advice Jesus gave his disciples, as stamina is a necessary gift in the spiritual life. And to expect is to watch for and be open to those thin places where we may catch a glimpse of the eternal.
Simone Weil was a young French Jewish woman who lived during the first half of the 20th century. She earned a doctorate in philosophy and began a teaching career, continuing to study religion, especially Hinduism and Christianity. She was a social activist who decided to leave academic life to work in a factory in solidarity with underserved factory workers. A pacifist most of her life, she supported in peaceful ways resistance movements in the Spanish Civil War and then her own German-occupied France. The French novelist Andre Gide called her “the most spiritual writer of this century,” and Albert Camus designated her “the only great spirit of our time.” Her health was always a challenge, and her solidarity with those suffering in her native France led to an early death in 1943 at the age of 34.
In her “Spiritual Autobiography,” a letter to a priest, she explains why she did not join the Roman Catholic Church:

And here she refers to all that is outside the church: the centuries of human history that preceded the establishment of the church, other countries and races where Christianity is not embraced, secular life, “traditions banned as heretical,” and “all those things resulting from the Renaissance,” which would include the Enlightenment. Thus she concludes that she must remain where she has been since birth, “at the intersection of Christianity and everything that is not Christianity”:

I have always remained at this exact point, on the threshold of the Church, without moving, quite still, en hupomene (it is so much more beautiful a word than patientia!).

The latter is Latin for patience, which is related to the Latin word for suffering, but she prefers the Greek (here transliterated by me) en hupomene, which means to “endure, hold out, and stand firm,” a far more active stance.
Personally I have often found myself in that same place, hanging with others on the threshold of the church, the margins of institutionalized religion, standing firm with Simone Weil to keep the doors of the church wide open to all that God loves. After all, that’s where Jesus would be.
This weekend in Pittsburgh, PA - Hear and meet Chris at these public events:
Fri. Dec. 9, 7 p.m., Sixth Presbyterian Church, speaking on “Reconciliation.”
Sat. Dec. 10, 10:30-Noon (light lunch included), Covenant Presbyterian Church, Butler, PA, speaking on “Bullying is Not Just About Youth!” Butler LBGTQ Interfaith Network, Persad Center's Community Safe Zone, Butler Chapter of PFLAG.
Sun. Dec. 11, 10:45 a.m. Community House Presbyterian Church, sermon.
Sun. Dec 11, 7:00 p.m., MCC Pittsburgh, sermon (different from sermon above!).
Sponsored by Ministry with Sexual Minorities, A Task Force of Pittsburgh Presbytery.
Posted by Chris Glaser at 5:00 AM 0 comments