Jesus as the New Adam 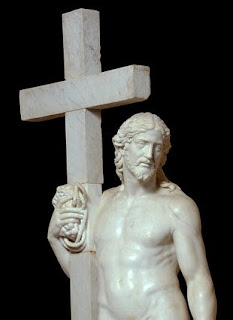 Jesus as the new Adam is a trope familiar to Christianity since Paul’s letters to the Romans and Corinthians. It has come to be reinterpreted by others, and perhaps what I present here has already been imagined, as anyone reading this blog knows my knowledge is limited. But I want to offer what meaning came to me as I grappled with the notion of Jesus “dying for my sins” during this recent Holy Week.

I have flat out written on this blog that the God who is worthy of my devotion would never require the death of any kind of scapegoat as a stand-in for me taking responsibility for my own sins.

But I have also written that the sacrificial love represented in the story of the cross mythologically conveys the absolute and eternal depths of God’s compassion. Many theologians have focused on the concept of God dying on the cross rather than “his only son,” taking the onus of a demanding, bloodthirsty God off the table. And anyone who has had a terrible sin to forgive of another knows the suffering such compassion entails.

Longtime readers may remember that one of my Holy Week practices is to read one chapter each day of a short book, The Temple of God’s Wounds, in which the narrator visits a mythological monastery at a turning point in his life. I’ve written that I overlook his transactional understanding of atonement to contemplate other, deeper spiritual wisdom contained therein.

This time I focused on how difficult it is for him (and  for me) to face that which is absolutely holy. I understand better the “mysterium tremendum,” the “terrible” face of God or, as the OED adds in its definition, of existence itself.

During our last visit shortly before his death, an elderly dedicated churchman surprised me by his sudden tears and seemingly non-sequitur confession, saying something like, “I hope dear old Mother Church can forgive me for any embarrassment I’ve caused her.” I don’t think this was prompted solely by his having been a closeted gay man.

Age may make us aware how far we have fallen short, not only of the glory of God, but of the glory of being a child of God, because I found during Holy Week that, along with the writer of The Temple of God’s Wounds, I felt such a need for forgiveness! Now, I know, as an introvert, that even the good I may do can embarrass me; but I’ve done plenty of things I’d prefer not to have in my eulogy!

I have a depiction, acquired in Egypt, of a Pharaoh being weighed on scales opposite a feather. The tradition was that if the Pharaoh’s heart was heavier than a feather, he could not enter eternity.  Few if any of us could pass such a test!

I have been reading The Islamic Jesus by Mustafa Akyol. A reader and contributor to my blog had asked me if there was a book I was eager to have in my library. Having just read a review of this book, that’s what I asked for. What’s remarkable to me is that the Qur’an, while not supporting Jesus’ divinity, reveres him as a prophet, like Moses and Muhammad. The writer suggests that this was the view of the Jerusalem church and its Jewish Christians led by James and represented in Christian scriptures by the epistle of James, which does not refer to the divinity of Jesus and famously includes, “Faith without works is dead.” This contrasts with other Christian emphases on mere belief, and specifically belief in Jesus’ divinity and substitutionary atonement.

Thus I realized that progressive Christians have that in common with the early Jewish Christians, not to mention Muslims and Jews. We may or may not hold to Jesus’ divinity, and consider that doing justice and practicing charity and showing mercy are what the Lord (i.e. God) requires of us.

For me as a progressive Christian, Jesus is the “new Adam”—not the innocent and perfect and beautiful (and initially sexless) Ken and Barbie doll of Adam and Eve; rather the tried and tested, unappealing and vulnerable and wounded one, acquainted with sorrows and grief, the bearer of the sins and injustices of the world—political, religious, and personal. Treasonous and blasphemous, betrayable and deniable, because compassion was all he held dear.

Thus he knows the trouble I’ve seen, the trouble I’ve gotten into, and the trouble I’ve caused, not just personally but throughout the world. He is the real human being that Adam and Eve could not even imagine in their innocence and privilege. They were rough drafts, prototypes, not as fully human.

So when Jesus prays, “Forgive them, for they know not what they do,” it seems genuine, true, and possible.

Copyright © 2017 by Chris R. Glaser. Permission granted for non-profit use with attribution of author and blogsite. Other rights reserved.