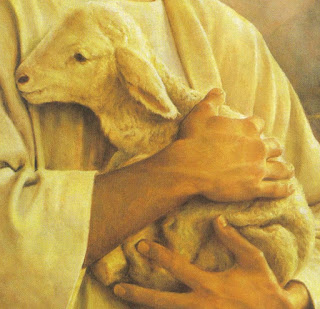 Following last week’s reprise of A Healing Touch, this September 28, 2016 post reminds us that we are ultimately held by God. Given the verdict yesterday, you may want to read, "I Can't Breathe!"

I’ve had a lot going on lately, and when I wake at night, I start thinking of all those things I need to do, should have done, am anxious about. I don’t mind when I use such nocturnal musings constructively, as when a post or talk or retreat comes to me and I develop it, lying still. But when my thoughts serve no purpose, I am bothered that I’m losing sleep over them. The worry gene runs in my family, so I’m not alone.

Lately my usual way of simply blocking thoughts, or using a mantra, verse, short prayer, or Psalm 23 has not been working, so I’ve discovered a new strategy.

I imagine I’m being held by God: the soft bedding, the warmth of Wade, the firmness of the mattress, the caress of the ceiling fan, the enveloping darkness become God holding me. And lest you think I am centering God on me, I believe this is true for everyone.

Process theology talks of the cosmos as God’s “body.” God is not separate from the world—what is material is God’s incarnation, God’s embodiment. And body theologians try to recover the body as a locus of divinity. So I do have theological legs to stand on.

And Christianity’s premise is the Incarnation, that God became one of us, and offers God’s body and blood that we may become the Body of Christ, an agent of redemption in the world. So I also have a Christian leg to stand on.

Jesus said the kingdom or commonwealth of God was coming into the world and already in our midst. The trajectory of the Bible from Genesis to Revelation is that of God coming into the world, not abandoning it. And Paul remarked that the whole creation was groaning in birthpangs to bring something new into the world, and that in God “we live and move and have our being.” So I have a biblical leg to stand on.

I also believe that I’m a part of God as well, so I think of cuddling with Wade as having divine inspiration. Teresa of Avila said that on earth, God’s body, Christ’s body is our own. And Augustine’s spiritual goal was resting in God. So I have church tradition behind me.

My “ah-hah” is how good it feels to be held by God and to hold as God. It awakens a new kind of eroticism, if you will, that feeling of bliss one experiences in the unity of lovemaking or prayermaking. I’ve written elsewhere that “eros” is our “urge to merge,” what inspires the lover as well as the mystic.

I’ve also spoken and written about the Beloved Disciple, who lay his head on Jesus’ chest during the Last Supper, “listening for the heartbeat of God,” as Celtic Christianity would have it. I’ve poked fun at recent English translations of that passage that seem to keep distancing the beloved disciple until I fear the next translation will have the beloved disciple in another room entirely!

What I believe is that we fear such intimacy with God, one of the earliest themes of my writing on spirituality, a cover article for Presbyterian Survey in the 1980s.

Jesus experienced or was experienced as being a child of God, the essence of Yahweh, and the mystical gospel writer John declared that Jesus came so that we might all be children of God. So I have a mystic’s reason for my experience.

I encourage you—no, I urge you—imagine yourself being held and touched and cuddled by God. Imagine God dwelling in you, your breath, your body, your touch.

It feels good because it is good.

FYI-I considered retiring from my blog on its tenth anniversary in February but didn’t want to “abandon” readers during the pandemic! My brother suggested I run “the best of” posts, and I decided to run past posts that speak to our current experience. This will also give me the opportunity to write a new post occasionally. Thanks for your continued interest!

Copyright © 2016 by Chris R. Glaser. Permission granted for non-profit use with attribution of author and blogsite. Other rights reserved.