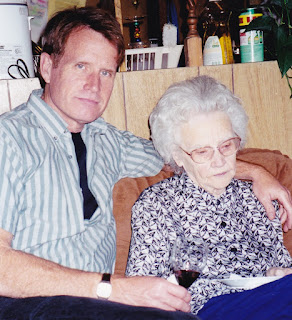 As our pandemic makes us all “untouchables,” I thought this post of June 13, 2018, might “touch” our experience.

As I get older, I have fewer opportunities to be touched. I knew that about old age even before I got there, and that’s why I’m sitting so close to my mother in the above photograph, my arm around her. I had noticed the need particularly among the older women of our neighborhood church. The passing of the peace was an opportunity for older folk to receive and give full-on hugs. Now I too am grateful for such hugs in greeting or in parting worship.

I have written of an experience of lovemaking that restored my sense of lovability in my book, Come Home! The “healer” in that case visited Atlanta last year and I was able to give him a copy of the book, marking the passage and expressing my gratitude.

But those opportunities are rarer as one ages, even when in a relationship.

In an email exchange with a friend and reader of this blog concerned about losing the gay parts of himself as he enters an assisted living program, I waxed philosophic about my own situation:

As a youth I had fantasies. As an adult I had experiences. As a senior I have memories. I need to hold on to my memories even though they don’t have the anticipatory ecstasy of fantasies or the existential bliss of experiences.

So, simple touch becomes all the more important.

When I was a kid, I used to love sitting in the car as a gas station attendant cleaned our windshield, enjoying the gentle rocking of the car—oh, the olden days of full service stations! I also enjoyed getting my hair cut, and my initiation rite into manhood was when, after many years, the barber finally honed a straight razor to trim my sideburns. These were gentle and safe ways to have a man touch me, and I found them healing.

My father enjoyed telling the story of rocking me as a baby while I steadfastly refused to go to sleep. I no doubt simply enjoyed my father or mother’s touch, being held close to their hearts. (As late as my teens, my joke with Mom was that I could still sit on her lap!) No doubt my body remembers and that’s why I enjoy cuddling so much.

All of this comes to mind because of a transforming incident during my recent contemplative retreat. Though our Roman Catholic hosts were welcoming beyond mere hospitality, their church does not allow offering Communion to Protestants. I do not like this, as you might guess, and I had decided not to go forward to merely receive a blessing. But in moving out of the way to let others in my pew pass by, a smiling sister gently urged me to go forward for a blessing. So I did, crossing my arms to indicate my heresy of being a Protestant.

I expected the tall and very aged priest to simply make the sign of the cross in the air and say a blessing. Instead, he gently touched my forehead while saying a blessing. The power of his touch jolted me. I immediately felt good inside, and the bliss remained with me for an hour. I could not help but think his power was deeply spiritual.

With all the conversation these days about inappropriate touching, by priests and other professionals, I sorrow that this may lead to less healing touch. I remember how my mother’s first graders used to hang on her, begging to be touched and hugged, even after they went on to higher grades.

Being old, I have during this same time had to go to a dentist, an orthodontist, and an oral surgeon to repair or remove two “virgin” teeth which broke. My dentist praised me as one of his best patients, I think because I have a high tolerance for discomfort and pain, no doubt learned in part as a gay activist in the church! (Smile)

But their healing touch also made it possible for me to sit still for some difficult procedures. After two root canals, I explained that the orthodontist’s abdomen pressed against my head during the procedure was somehow comforting. I asked if he did that intentionally to calm his patients, but he explained it was just ergonomically sound, otherwise his reach over me would tire his shoulders as he worked on my teeth with the help of the lens of a microscope over my head.

I thought of Temple Grandin, the autistic expert in animal science who discovered she could calm herself by a device of her own invention that held her and later applied that to an invention to calm cattle on the way to slaughter. There is something calming about being held and touched, whether facing life or death.

As a progressive Christian, one of my reservations about Jesus being known as a physical and mental healer is that such magical qualities do not fit my desire for him to be known rather as a spiritual mentor and healer.

But maybe his touch was like that of the priest’s, or that of the orthodontist’s, or that of a hugger, or that of a lover—especially when visited upon so many people who were “untouchables”: lepers, epileptics, the sick, the dying and dead, those with physical or developmental disabilities. Women of his time were considered untouchable during menstruation. Children were assumed unclean, one of the reasons his disciples tried to send them away.

FYI-I considered retiring from my blog on its tenth anniversary in February but didn’t want to “abandon” readers during the pandemic! My brother suggested I run “the best of” posts, and I decided to run past posts that still speak to current issues. This will also give me the opportunity to write a new post occasionally. Thanks for your continued interest!

Copyright © 2018 by Chris R. Glaser. Permission granted for non-profit use with attribution of author and blogsite. Other rights reserved.