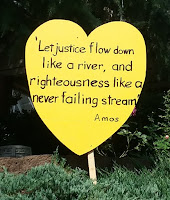 Today and next Wednesday I am revisiting two posts relevant to the upcoming U.S. elections. This post appeared on Nov. 7, 2012, but was written on election day, Nov. 6, before results were known.

Mid-October I read in the morning paper about the Lance Armstrong doping scandal, the Taliban shooting of 14-year-old Malala Yousafzai for encouraging the education of girls in Pakistan, and the death of George Whitmore, an African American whose life was never good after a reckless and wrongful conviction for murders committed while witnesses actually placed him in a catering hall where he was employed, watching Rev. Martin Luther King Jr.’s “I Have A Dream” speech on August 28, 1963.

Not exactly the stuff of contemplation, you might think.

Yet exactly the reason we need contemplation. In Soul Friend, Kenneth Leech echoes Merton and other contemplatives when he writes:

The contemplative is more of a threat to injustice than the social activist who merely sees the piecemeal need. For contemplative vision is revolutionary vision, and it is the achievement of this vision which is the fruit of true spiritual direction. A spirituality of clear vision goes hand in hand with love. To see with the eyes of God is to see truthfully and lovingly. Such a love is not sentimental or naïve: it is a love which undermines oppression and burns away illusion and falsehood, a love which has been through the fire, a love which has been purified through struggle. It is a love which has known solitude and despair.

I’ve been re-reading insights I’ve underlined in books I read long ago. The morning that I saw the above articles, I happened onto one of Mahatma Gandhi’s ruminations in The Gandhi Reader (ed. Homer A. Jack) on satyagraha, variously interpreted as love force, truth force, and soul force and politically expressed in non-violent direct action. “The force of love is the same as the force of the soul or truth,” Gandhi wrote.

When asked for proof of its existence in history, he replies, “History is really a record of every interruption of the even working of the force of love or of the soul.” He uses the illustration of two siblings arguing. If they go to war or sue (for Gandhi, a lawyer, another form of violence) their quarrel will be remembered, but if their love for one another is reawakened and they reconcile, few notice because that’s as it should be. “Soul-force, being natural, is not noted in history,” Gandhi explains, declaring that what’s true of families is true of nations.

The next day our newspaper carried an article about studies indicating we retrospectively characterize a week or a time in our lives by its peaks rather than intervening constancy, which to me seems to validate Gandhi’s point.

But I would add that satyagraha is revealed in history when love stands up to the test, such as Gandhi’s challenges to injustice through civil disobedience. This may give us a new way of understanding the cross: Jesus’ love force stood up to “the powers that be,” and the crucifixion interrupted the natural trajectory of truth, love, and soul of the inbreaking commonwealth of God, just as it was subsequently interrupted by the persecution of early Christians who tried to live into that commonwealth. Thus Easter is an affirmation of the triumph of truth, love, and soul and non-cooperation with the forces of violence and death.

I schedule my posts on Tuesday for Wednesday publication, so this was put in final form on election day in the U.S., which means I do not know the outcome. Indeed, the outcome may not be known by the time you read this, given the anticipated closeness of the presidential election and the possibility of contested election results.

No matter. Whoever is elected will have to deal with those who want to make a name for themselves or their party or their ideologies by exploiting division and divisive issues—in other words, making history rather than letting the forces of love, truth, and soul bring reconciliation, mercy, and justice to Washington, D.C. As much as I believe in recovery programs and understand alcohol may easily exacerbate orneriness, I long for the time when lawmakers would end their day having cocktails together and trust working together and compromise without looking to give the latest sound bite to inflame their constituencies, satisfy their contributors, promote their ideologies, and enlarge their egos.

What we need in government—as elected officials and voters—are more contemplatives.

Donations to Progressive Christian Reflections may be given safely by clicking here and scrolling down to the donate link below its description. Thank you!

Copyright © 2012 by Chris R. Glaser. Permission granted for non-profit use with attribution of author and blogsite. Other rights reserved.